We have started a series of games based on a world we have created, and here is the beginning of that story. We hope you look forward to the series as much as we do!

Long Ago, in the beginning of sentient life on the planet of Githoria, there was only 1 group of Sentient life forms. As with many life forms, how they came to be is lost to the time of legends. They began on the continent of Mehlia. Life was pleasant and as a Crustacean species having multiple arms and legs, as well as a shell to protect themselves made them uniquely created to survive. 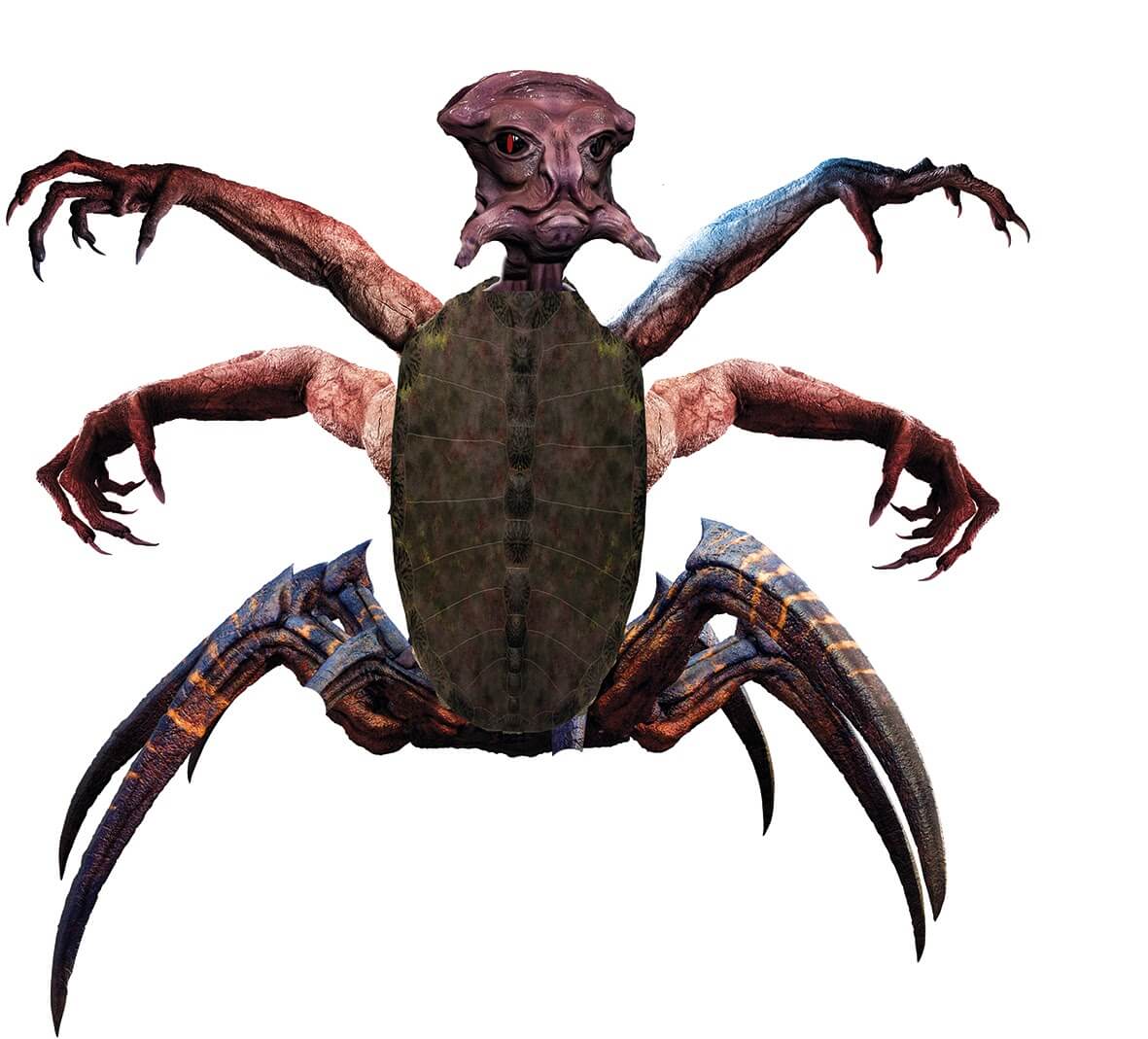 Living on the land and sea, helped them to adapt, and as time went along they began to be sentient. The people began to build villages, and create trade. Having 6 legs and 4 arms made a mathematical system based on 10’s an easy thing. Females being 2.5 meters tall and 3 meters long, while males were smaller, made them large enough to defend themselves against all but the largest creatures, and when they began to make weapons for themselves, they soon became the Hunters. They called their species the Githorians after their planet. Githoria was their word for plentiful harvest. As a people, there were 4 males for each female, and with the females being larger than the males they naturally dominated the species. With a lifespan of 50 years, many females would lay 30-50 eggs each year, and many of them would cluster together, so the males would bring them food, and former the outer ring of defense for the tribe.

They began as many civilizations do, creating writing, laws, and farming. When they began to outgrow the island, they launched Pods of creatures interlocked, which floated on the oceans, and began to explore their world. This is how they had traveled the waters of their world from before they were sentient. When they encountered a shallow zone, they would move in and begin to harvest the area until they outgrew it, and then would send half of the people in a pod to explore the world for new areas.

Only some of the pods actually made landfall before the people died at sea, but this still allowed them to expand their new civilization. Each Pod that made landfall expanded the reach of their civilization. The only problem being that the farther from the starting point, the less that the groups resembled each other. On all of the continents, the groups that moved into the land, and away from the sea, began to have new issues, and bits of language added. The religion of the peoples began to be different, as the people separated, they had new problems and opportunities. Different groups, even on the same continent, had different language and customs. As time went on, these differences began to become more pronounced, with tribes forming of allied villages speaking the same language and having the same or similar customs.

These tribal formations grew into nation states, as the people spread throughout the World. Each began to create new things and ideas, but the First Settlers on the continent of Mehlia began to dominate using Trade, with their creation of the Commerce Federation, and the first to discover Sailing. The fact that the continent of Mehlia was a majority of swamp, allowed the people to grow and prosper. The ruler of Mehlia, Klakium, declared herself the Eternal Lord of Githoria, and established the first Empire. Their main city of Contor, Using their superior technology they were able to establish rule over many of the closer tribal federations. The people seemed happy at first, and many generations passed with the people living in relative peace.

Every Generation the Empire would expand, absorbing more tribal groups and City States into the Empire. This began to create resistance to the Empire. The Empire’s troops were not good at fighting in the Mountains, so rebellious groups on the border of the Empire often established new Anti Empire groupings in the mountains and the area away from the Empire’s Hegemony.

While the Empire expanded their terrain, they also expanded their culture and capital. The center of Mehlia was turned into the official capital city of the Empire. All trade routes led to Contor. Culture began to grow with Art and Museums, The people of Mehlia and especially Contor began to grow, and especially began to feel superior to the other peoples. This began when the Empire had a weak emperor, Klakium XXVII.

Klakium XXVII was convinced to establish the Council of Wisdom, with the 10 best leaders of the Empire to be on the Council. This also allowed the Emperor to begin to think more of herself and luxury, rather than ruling the people. This allowed the nobles who supplied her with luxuries and males to get several laws enacted. This led to the creation of the Council of Wisdom. The Council ruled in the Emperor’s place, allowing her more free time. The Council passed the law of Ranks, by a vote of 10-0.

The leaders of Mehlia were rank 5, the people of Mehlia were rank 4, the citizens of the Empire were rank 3, the friendly tribes/City States were rank 2. The peoples that opposed or were not friendly, whether by choice or not were rank 1. Klakium XXVII was convinced that to expand the Empire, they needed to expand by force. This let anyone in the empire to rule over people of lower rank than them. It was thought by Klakium XXVII that this would let the people expand the Empire, at a minimal cost to the Empire. The peoples of the Empire used this as an excuse to attack the people who were not in the Empire. Future Emperess’ were figureheads, living a life of Luxury while the Council ruled in her stead.

After passing the first Law of Ranks, this caused many groups within the Empire to attempt to attack people not of the Empire. It also led many others to move to Mehlia, so that they could move up in Rank. This led to some severe power struggles over rank, that began to outgrow the expansion of the Empire.

The following map of the world shows the main continents, and the red area shows the Empire at its zenith: 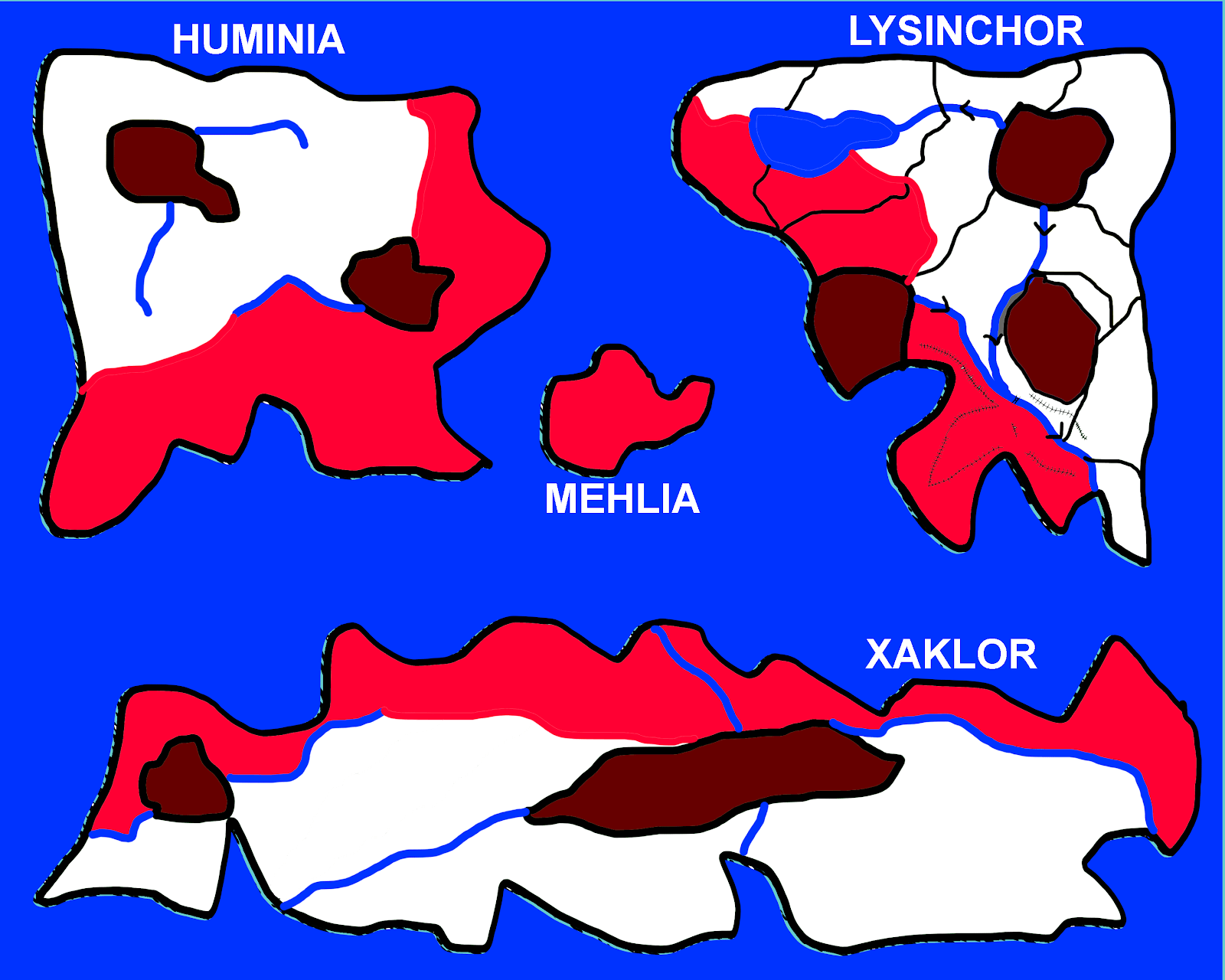 This was in the year AK 1217. AK is After Klakium, the death of the First Empress began the recording of history using that as a mark for the establishment of the Empire. The Empire had pushed far into all of the continents, but internal struggles in Mehlia, as well as a lack of coordination amongst the Empire soon led the people to stop expanding the Empire. The spread of technology such as writing, printing presses and education had revealed to the outlying territories how they were seen as lesser to the Mehlians. The Mehlians had become so used to being in power that they had grown bold in their usage of negative language and attitudes when dealing with the provinces. The invention of steam power and power generation would move forward to change the face of Githoria.